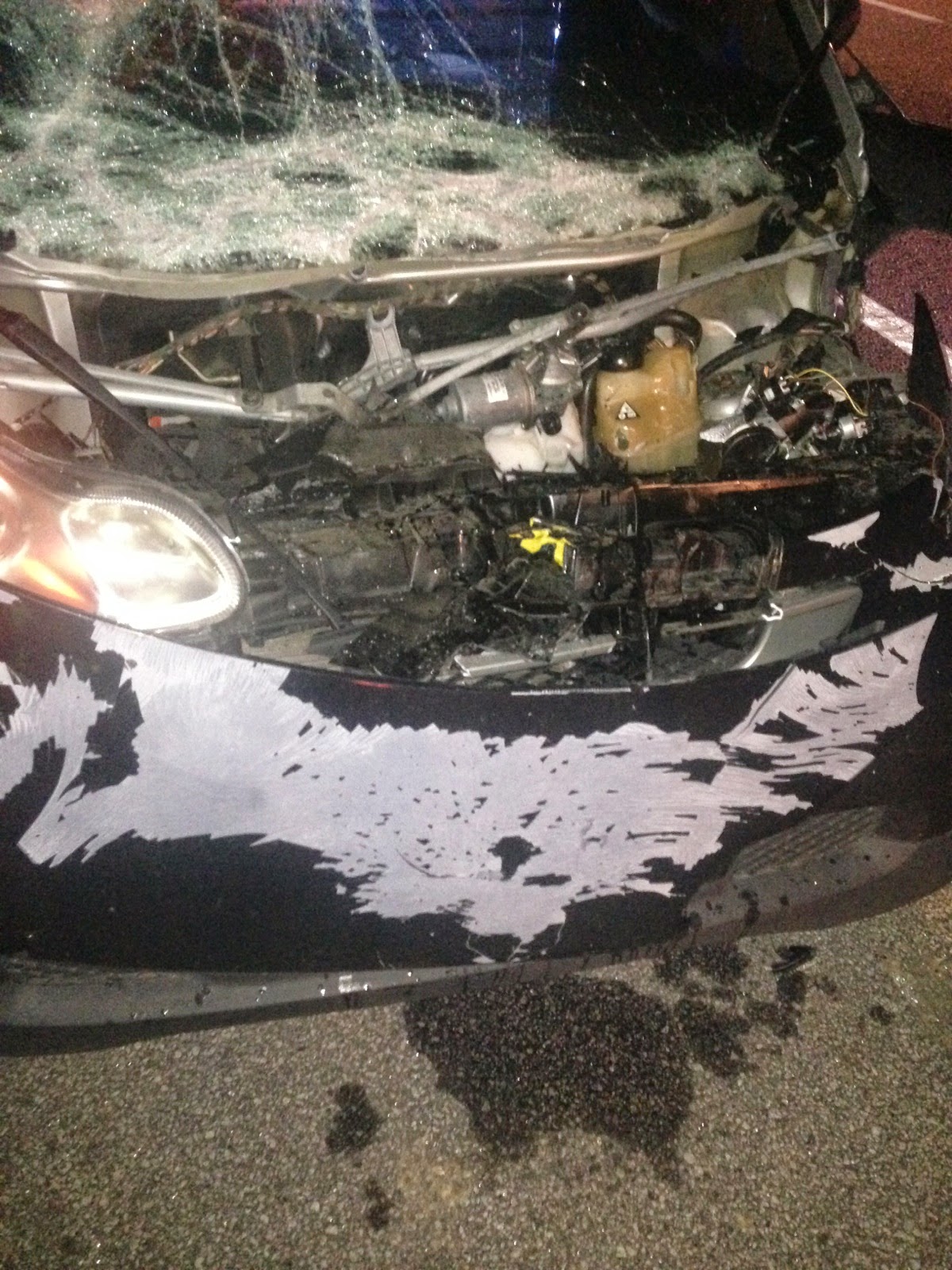 The above is a picture of my car post confrontation with a 6 point buck in the middle of I20 at 1am. So I've missed a little bit of training time.

I came through it mostly ok, but the car is totaled.

I won't be back training Jiujitsu until after thanksgiving, but I was able to get in the gym tonight to do some prehab-rehab.

I did half an hour on an elliptical, then 3 sets of 10 with 65 lbs on the bench, and 1 set of 10 with 45 lbs along with 3 sets of 10 squats with 115 lbs. Just enough to assess all of my limbs and make sure everything still worked properly.

Followed that up with a 20 minute massage and now I feel like life is pretty good. I'm still going to be competing at the New Breed tournament Dec 6th no matter what.
Posted by Kintanon at 3:40 AM No comments:

Missed the rest of last week training due to work project and being kind of sick. Back on the mats this morning though.

Chris and some of the other guys were out in Cali for Worlds Masters, so they weren't back yet which left a small gaggle of us hanging out at the beginning of no-gi november. We were chatting about random stuff and somehow leglocks came up, so I ended up teaching an entry to the saddle (inside leg triangle) and knee bar and heel hook attacks from there, then basic heel hook defense, and then the specific defense against the saddle position.

We drilled that stuff for a while and then rolled gauntlets for like 45 minutes or an hour. I got to roll for like 20-25 minutes with a purple belt who is slightly bigger than I am, and slightly better, which was a lot of fun. We would go back and forth positionally a bunch and then eventually he would catch me with something that he was just slightly better at doing than I thought he would be, including a really smooth transition to an armbar from the back, and a really nice reversal from side control.

This is the first time in a while I've rolled without having done a bunch of conditioning beforehand, and it felt really good. I was able to put together a lot of stuff against some of the bigger guys and I really felt good about all of my jiujitsu. Most problematic rolling partner is still a very energetic and athletic multi-stripe blue belt. He's really really really good at 2-3 things, and pretty good at everything else, so he can frequently get 90% past my guard with a leg drag, and then I have to fight to reset to guard, then we do it all again. And he has great pressure, and great base, so he's very difficult to sweep. He's an awesome partner to train against because of the good mix of intensity and skill.
Posted by Kintanon at 2:41 PM No comments: