The guys over at BJJHQ.com were kind enough to toss me one of these pimpin' 93 Brand rashguards to take a look at and I took it for a spin over the weekend.

The first thing I noticed was that the purple color was paler than I expected. It was almost a pastel purple instead of the brighter purple I was expecting. That's going to come down to a personal preference thing, I don't mind the paler colors and the overall effect is good, but if you are looking for a vibrant purple rank rashguard then you'll probably want to skip over this one for something with a little more pop.

If color isn't your primary concern though there's a lot to love about this thing. The construction is REALLY sturdy. There are super heavy duty seams on it, which at first I thought would be irritating, but became un-noticeable the second I put it on, and the fabric is much sturdier than my regular under armor rashguards without being as hot as my heavy duty rashguard. It breathed well, kept the sweat off of me, and was nice and cool.
There is one small item about the workmanship, there was a bundle of loose threads still on one seam where the seam had been completed but not trimmed. I snipped them off with some scissors before I put it on and didn't have any trouble with it, but it is something that they should probably do in manufacturing. 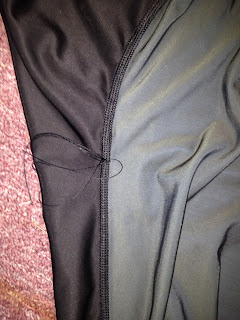 You can see the threads there, but you can also see how heavy the stitching is. Very very sturdy.

The fit was excellent. I got a small, of course, and it was nice and snug as I expected, but it also was long enough everywhere, which I sometimes have problems with because of my slightly odd torso dimensions. The best thing about it was that it's the first rashguard I've had that didn't ride up, at all. I pulled it down and tucked it under my shorts like I always do and expected to have to stop and retuck it after every couple of rolls, but it never budged. It stayed below my waist the entire session.

Now, there are some additional claims that I can't really verify yet, but this thing is supposedly made of a fabric that is anti-bacterial, AND anti-odor. I'll have to revisit this review in a few months and update on the status of the rashguards odor after several months of normal wear.

This is honestly the only rashguard I've ever put on that I feel like is worth the 60$ they are asking for it. My next most expensive rashguard that I own is my heavy duty winter rashguard that I paid 35$ for and the fabric on the 93 is definitely far higher quality.

I definitely give this a 9 out of 10. I would give it a full 10 if the purple were a little more vibrant and a little less easter candy, but the workmanship and fit are outstanding.