There's an Englishman in my Jiu Jitsu! 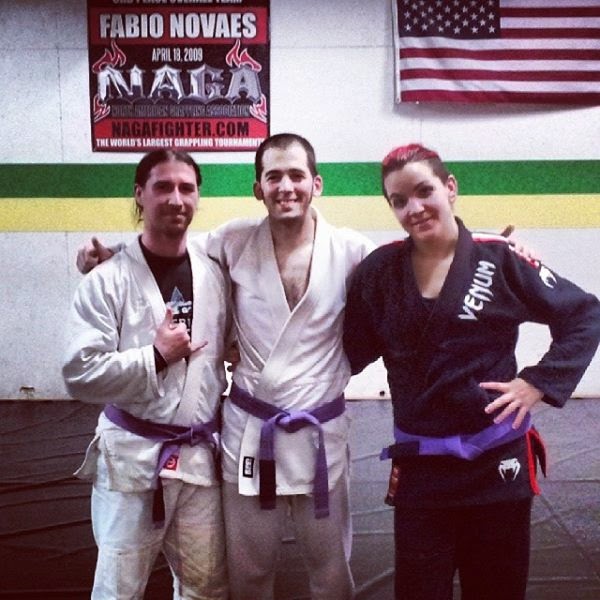 More news on the training front, world famous Jiu Jitsu blogger and all around cool guy Slideyfoot came to the states to visit some gyms in the southeast, so I made the trek down to Tampa for the chance to finally meet and play with him and Stephanie (Sister of Allie the Clear Belt). I left work at about 10pm, drove until about 4:30am and then racked out in my Smart Car in a Big Lots parking lot about 30 minutes from where Slidey was crashing.
I woke up about 8:30 and went to pick him up, then we headed east to the gym another hour and change. The guys and gals at Fabio Novaes Lakeland were awesome and super friendly. I rolled with Slidey for a while, then with Steph, and then with one of their purple belts who was a little bigger than I am that was flawlessly hitting a butterfly guard pass that I have been working on off and on, so I got him to show me some pointers on it. I hope to be able to implement those tips when I get back on the mats regularly (News about that upcoming). I also rolled with a four (I think) stripe blue belt who made literally zero mistakes. His positioning and reactions were all as close to flawless as I've ever run into. It was a pleasure to roll with him and I expect that two or three years from now we'll see him taking the brown belt podiums by storm.

Me and Slidey, being the geeky fellows that we are, spent a lot of time chatting about theory and concepts and movement and playing around, but one thing I did really notice about his game is that while his top pressure was excellent, he wasn't very adventurous with his rolling. Branch out Slidey! Take some risks!

A few hours of that and then I rolled back out with Slidey and we hit up an awesome little pizza place (Slidey ate an entire pizza by himself. I was impressed.) and then after hanging out a bit more and screwing around with some shin on shin combat base counters I had to head home. Eight hours later I was back in my own bed.

Additional updates: We close on our new house at the end of this month, which will reduce my commute time by an hour and a half. It will also put a new gym directly in the middle of my route to work, which just happens to have 10:30 am classes. So the monday after we finish moving I will be heading down there to check the place out and make arrangements. With any luck I can still get 130 or so hours of BJJ in this year (4 classes a week, 1.5 hours per class = 24 hours a month, June-Dec = 7 months, so 168 total possible BJJ hours available). Hell, I might even end the year better at Jiu Jitsu than when I started it!

The next update here probably won't be until after I start at the gym there, once that happens the blog will be back in full swing since I'll have actual training to write about again.
Posted by Kintanon at 3:43 PM