Slideyfoot has already done an excellent writeup here on what the tradition is and why some people like it and some people don't in general. Since he's the sort of fellow that enjoys getting additional perspectives on things from various people that train I thought I would write up my experience and how I feel about the tradition.

After it was decided that I had successfully completed my test for Purple Belt the class was lined up, etc... Just as described above. I started on the end opposite the instructor and walked towards him while the other students, probably around 30 of them, gleefully battered me with their belts. Through the Gi I barely felt it, but the whole atmosphere was very infectious. I was grinning through it and on the way back started to talk a little smack. Specifically I told them they hit like little girls. As a result I got cat-called a bit about walking through one time without the Gi. I stripped the Gi top off with a grin and jogged back through the line one time which resulted in the bruises you can see in this picture: 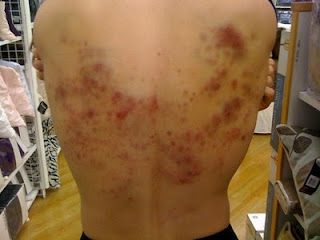 That was entirely optional and my own fault. After having the belt tied on me I walked back through with the Gi top on again with my new belt for a total of 4 trips through the line.

Frankly, I enjoyed the experience. It was definitely a bonding experience with the rest of the class and I feel more comfortable with the idea of  going up there to train with them and I feel like I earned a place within the Alliance Family by participating in the same ritual that all of the other people have participated in.

On that note, I did NOT get a belt whipping when I got my Blue belt. I don't know why, but I agree with the lack. I think that achieving the purple warrants a little hazing and initiation as it shows you're definitely committed to JiuJitsu, whereas the Blue is still that introductory rank. I'm sure some people will be appalled at the bruises, but I'm completely unbothered by them.

I don't know that I necessarily wholeheartedly approve of the tradition, but it's right for me and it's something I will likely continue when I eventually have a school of my own.
Posted by Kintanon at 8:59 AM