I started trying to get one of these over a year ago and had zero luck. Amazon was sold out of them, MMAWarehouse was sold out, even the manufacturer couldn't tell me where to get one. But someone my wife managed to magic one up for me for christmas. I've worn it for half a dozen or so classes now so I feel like I can offer a solid review of the strengths and weaknesses of the cup. 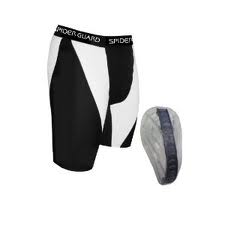 My first impression of it was that it was pretty sturdy feeling for a rubber cup with holes all in it. My second impression was that it was a huge pain trying to get the cup into the pocket of the compression shorts. The rubber has a lot of friction and tends to bind up on the compression shorts and not sit in the pocket all the way without considerable fiddling around. It took me a few times to get the hang of how to get it seated properly.

The compression shorts themselves FEEL very fragile. I got a size small because I wanted tight shorts and I have a 29 (This was a typo that had me with a 39 inch waist. Oops! Thanks Georgette!)  inch waist, and when I'm pulling them up I frequently hear strings snapping. That might be normal "settling" but it makes me afraid to pull too hard while I'm getting into them. That being said, they haven't actually ripped or torn or anything, they just give an impression of fragility.

Once you have them on for a few minutes though they are a DREAM. I forget I'm wearing the cup as soon as I start moving around. It never digs into my stomach when I'm playing inverted guard or getting folded in half while working to finish a triangle. The cup is definitely sturdy enough to shrug off the occasional random groin shot without even a wince and it provides a nice barrier between my junk and my opponent when I'm doing things like mounted triangles or bicep slicers.

This really is an excellent cup for jiujitsu. I don't think it would stand up well to a full on kick in the crotch, but then again, it might. And for that matter I've seen guys break plastic cups in half, and even dent metal ones. I've also seen metal cups slide and trap a testicle to nasty effect. The spiderguard flex cup is in no danger of doing anything like that, so I have to see I highly recommend it.

My Rating: 9.5/10. It only missed half a point for the rubber material grabbing the compression shorts and so making it a little fiddly to get inserted. I can not stress enough that this is the MOST comfortable cup I've ever worn in 17 years of martial arts training.
Posted by Kintanon at 9:20 PM