So my friends over at MMAHQ and BJJHQ sent me a pair of Manto BJJ Shorts to check out and I finally got my hands on them today and was able to try them out.

The first thing I noticed was that the color is VIBRANT. The blue is REALLY blue and the red is REALLY red. I don't know if that will fade with time, but for the moment they definitely catch the eye. 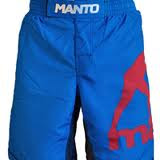 The logo on the side is a nice high quality screenprint, not some kind of stick on that will peel off after a couple of rolls so it should last as long as the shorts do.

The material feels very sturdy, somewhat thicker than my old NAGA shorts which gives them a very durable feel. I was worried at first that this might lead to them feeling hotter once I got going. The stitching is VERY heavy duty. A nice triple stitch on every seem with reinforcing at the tension points. These are easily the sturdiest shorts I've ever owned.

The ONLY point that I feel a little iffy on is the amount of velcro being used on to secure the shorts. I only feel some trepidation in that regard because the only real problem with my NAGA shorts is that the velcro teeth broke off over time and so now the fly doesn't really close all the way, but those shorts have snaps in addition that help keep it closed. The velcro on the Manto shorts does feel a lot sturdier than my other shorts though, so I feel pretty comfortable that the velcro will remain fully functional for at least a couple of years (My NAGA shorts are four or so years old now) with no reduction in holding power.

The best thing about these shorts was the fit though, which owes itself partially to the velcro I was just complaining about. I got a small, and I am a 30 inch waist. I could have been an couple of inches fatter and still been comfortable in them, but they would also easily go down to a 26 inch waist. The velcro is very versatile allowing for a comfortable fit at a variety of waist sizes. The shorts also have a drawstring to lend a hand, but they felt very secure even without the drawstring.

To test them out I went through my warmup, did some stability ball work, and ran a mile, then rolled for about 15 minutes straight. During the warmup they felt nice and light, almost as if I weren't wearing anything. Never bunched up or interfered during shrimping or any of my other normal movements.

The stability ball did have some issues though, the fabric that the Manto shorts are made out of has a little bit of friction to it which combined with the rubber stability ball caused the shorts to bind up a little and twist on me while I was moving around in KoB on the ball.

The run was another pass with flying colors though, comfortable to run in, no uncomfortable rubbing points, no bits of label or anything stabbing me. Every bit as good as running naked.

The shorts held up great during the roll as well. They didn't bunch up or interfere with my movement, I was never worried that they were going to pull down or come unfastened, and my earlier fears that the heavier material would be hot proved to be completely unfounded. These shorts pulled sweat away from me far better than my previous shorts and I felt cool and comfortable for the entire roll.

A bonus point for these shorts was that they were almost completely dry by the time I had finished changing clothes. In fact, about 15 minutes after I took them off you would never have known I had been grappling in them. They shed the sweat almost instantly.