Everyone has had the discussion about BJJ and sexism. People make sexist or homophobic comments in class, women are uncomfortable in the environment, female grappling is constantly barraged by juvenile comments whenever it shows up in video format. I've had to smack down some of the whitebelts at places I've trained for making inappropriate comments while women were rolling, but I've never been involved in any situation that demonstrated a blatant sexist viewpoint.
Until now of course. I previously reviewed a pair of Manto shorts, which I liked. However it seems that Manto's marketing department is laboring under the mistaken impression that they are selling pornography instead of grappling apparel which has resulted in this advertisement: 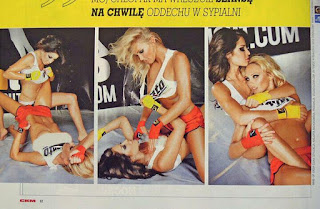 Now, maybe they think that their target market won't buy their gear unless half naked women are rolling around in it, but I see this as an entirely stupid way to market BJJ gear. I don't WANT my jiujitsu sexualized. When I'm on the mats I don't care about peoples gender, race, sexual orientation, political affiliate, or religious views. I'm there to LEARN JIUJITSU not to find a date. Trying to hyper sexualize the gear you are selling me just irritates me.
If you want to show female BJJers wearing your gear in competition then that's awesome. Promote women in the sport in a positive way, but showing two models groping each other is a terrible terrible way to advertise your gear.
I get annoyed enough at the constant models on display on the MMAHQ/BJJHQ ads, but they are normally just standing near the person wearing the product, or they are wearing it in a way that just displays the product on an attractive person. Not anywhere near as annoying as the softcore pornography masquerading as ad copy that Manto has produced.
I assume they have someone on staff that understands english over there, so I've sent them an email at Manto@mantofight.com directing them here and sharing my distaste with their advertising. I suggest that everyone else that is tired of fighting an uphill battle against the sexualization of women in grappling write them as well. It may not make a difference, but then again it may.

I received a response to my email from Manto and am posting it below. I'm still not entirely satisfied with that explanation considering the giant MANTO banner behind the girls, and will be sending them a reply requesting some further clarification:


Hello, thank you for your feedback. Please read our explanation here:

Ok, some explanation is needed regarding our now infamous "2 semi naked girls" post: 1. The "mma themed" photoshoot was organized by one of mainstream's men's magazine for which we were asked to provide gear and mat space. We had no creative control over the photoshoot. 2. Our comment to the picture posted was aimed at rather unconventional "back control technique" when the model rather then locking her hands to secure the grip was more interested in holding the opponent's breast. Admittedly, the choice of words was unfortunate and we can now see that it may and have offended number of people, for which we are genuinely SORRY. In no way we were trying to be disrespectful towards female jiu jitsu practioners or women in general. The goal was for the post to be sarcastic, not sexist. 3. Despite 95% of our range being men's products, we have for years been sponsoring (also with cash, which not many other brands do for women competitors) multiple female athletes at both amateur and professional levels, and we will continue to do so. To all offended once again: sorry. OssssssMANTO Team